What grocery stores do you have?

We have two Kroger locations, Wal-Mart, Aldi, IGA, and Save-A-lot. We have locally owned “mom and pop” groceries. Also a Sam’s Club located in both Chillicothe and South Point.

Where is the closest mall?

Ashland Town Center is about 40 minutes away. There is also the Huntington Mall located in Barboursville, West Virginia about 1 hour away and Easton Town Center located in Columbus is 2 hours away.

Where is the closest airport?

The closest airport is Huntington Tri-State Airport (HTS) which located in Huntington, West Virginia, 1 hour away from Portsmouth. John Glenn Columbus Airport (CMH) is 2 hours away and Cincinnati/ Northern Kentucky Airport (CVG) is located little over 2 hours away.

What kind of activities are available for children?

There are various activities for children of all ages. These activities include Cirque d’Art, Portsmouth Area Arts Council (PAAC), competitive cheerleading, library programs, travel sports teams, music classes, swimming lessons and horseback riding. There are also events sponsored by SOMC and the Portsmouth community for children throughout the year.

What kind of schools are here?
Scioto County offers progressive school systems and a local university.
What type of family activities are available?
The city of Portsmouth is a family-oriented community which makes this an excellent place to practice and raise a family. We offer the best of traditional, small-town America. Portsmouth is a town of rich past and promising future. Friendly people, a low crime rate, a qualified workforce, great schools, beautiful surroundings and an affordable cost of living make this truly unique city a wonderful place to live. Cultural and recreational opportunities abound. From the nationally known murals painted on the floodwall to Shawnee State Forest, there are many tourist attractions within the county.
Where is Portsmouth located?

Portsmouth is located at the confluence of the Ohio and Scioto rivers in the southernmost tip of the state. The City of Portsmouth is approximately 80 miles south of Columbus and 110 miles east of Cincinnati, with easy access to major metropolitan areas in the Tri-State Region. Scioto County is one of the most picturesque regions in the state surrounded by rolling hills, lush hardwood forests and scenic waterways. 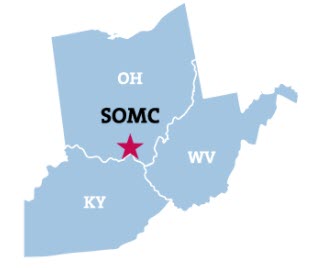 What is the cost of living?
The cost of living for Portsmouth, Ohio is 69.8 (based on the US average of 100).
Does Portsmouth have a library?
Where is the closest gym?
The SOMC LIFE Centers provide full service fitness and rehabilitation facilities in Scioto County. With centers in Portsmouth, Wheelersburg, and Lucasville you are never too far from taking steps to improve your health. We have been serving the community for more than 25 years and have one of the most experienced and highly credentialed fitness staffs in America. The LIFE Centers offers a variety of equipment, classes, and training to meet any fitness need. Here are some additional fitness links:
Is there a public swimming pool?
Yes. We have two public swimming pools. Porter Township Community Pool located in Wheelersburg and McKinnley Pool located in Portsmouth.
Where can I take my pet?
We have an off leash dog park in downtown Portsmouth. Named for a Scioto County K-9 officer killed in the line of duty, the Spock Memorial Dog Park is a great place for pets to explore. We also have several other parks in town including Mound Park, York Park, Tracy Park, Riverfront Park, & Earl Thomas Conley Park.
What river is Portsmouth located on?
The Ohio River is 981 mile river flowing from PA to the mouth of the Mississippi River in southern IL.
Are there outdoor activities?
Yes! We have something for everyone. Hiking, cycling, water skiing, mountain biking, fishing, hunting, camping, horseback riding, boating, kayaking, canoeing, outdoor concerts/festivals, golfing, and the list goes on!
What EHR does SOMC have?
SOMC is currently using MEDITECH.
Is SOMC considered a Health Professional Shortage Area (HPSA) site for loan reimbursement?
Scioto County and other counties in our service area are designated as a HPSA site. For more information on loan reimbursement, please contact your recruiter.
Is SOMC a for-profit or not-for-profit organization?
SOMC is a 501(C)(3) not-for-profit hospital.
Are all positions at SOMC hospital employed?
We have 250 providers are on our medical staff and 174 of those providers are hospital employed.
How is Portsmouth handling the opioid epidemic?

The opioid epidemic is a national epidemic and is something that we are feeling the effects of in our small town. This is an issue that is taken seriously by both the community and its leaders.

Southern Ohio Medical Center is working diligently on treating the disease of addiction. A physician-led leadership group is working on initiatives to create the change within our hospital and community. Some of those initiatives include changing our mind-set that this is a disease, educating our patients, family members, and our healthcare workers; and having difficult conversations with patients and informing them we are here to get them help.

There have been several community-based initiatives to address the issue as well. One local group is promoting a movement called “Take Back Our Mound Park” in an effort to reclaim an area where drug use is frequent. Another community group called Friends of Portsmouth (FOP) is working diligently to bring industry back to Portsmouth to a place where people want to raise their families. FOP is working to catalyze and organize progress and change in our community to a comeback city. They’re advertising local attractions, organizing spruce-up efforts, starting businesses and rebuilding a civic structure. Other groups such as the Portsmouth City Health Department, have programs to encourage addicts to receive help. And the area’s elected representatives have passed laws, both locally and at the state level, to address the problem. In fact, it was a bill written by Portsmouth’s state representative that resulted in pill mills being shut down not just locally, but throughout the state.

The fact this issue is being confronted aggressively by both government and community leaders, and the fact they’ve already proven themselves capable of solving drug-related problems by shutting down the pill mills, gives us cause to be optimistic that the current drug epidemic can be solved. Though we are in the epicenter of the epidemic our goal is to be the epicenter of change!